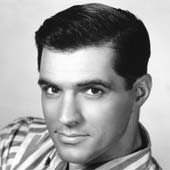 John Gavin is an American film actor. His most famous roles are in A Time to Love and A Time To Die and Imitation of Life (1959) for director Douglas Sirk and producer Ross Hunter, both of whom had earlier helped make a star of Hudson. Gavin also appeared in the classic thriller Psycho (1960) for director Alfred Hitchcock, the epic Spartacus (1960) directed by Stanley Kubrick, and the 1920s-era Julie Andrews musical Thoroughly Modern Millie (1967) for George Roy Hill.