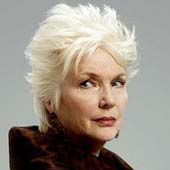 Fionnula Flanagan is an Irish actress. She has appeared in several made for TV movies, among them The Legend of Lizzie Borden (1975) starring Elizabeth Montgomery, Mary White (1977), The Ewok Adventure (1984) and A Winner Never Quits (1986). She won an Emmy for her performance as Clothilde in the 1976 network miniseries Rich Man, Poor Man. Flanagan's weekly-series stints have included Aunt Molly Culhane in How the West Was Won (1977). She did multiple appearances on Murder, She Wrote, one of them as Freida, a secretary aiding Jessica Fletcher in finding a murderer on the episode Steal me a Story (1987). She played Lt. Guyla Cook in Hard Copy (1987), and as Kathleen Meacham, wife of a police chief played by John Mahoney in H.E.L.P. (1990). Flanagan made guest appearances in three of the Star Trek spin-offs. She guest starred in the Star Trek: Deep Space Nine episode Dax, the Star Trek: The Next Generation. She has appeared in numerous films, most notably The Others opposite Nicole Kidman, The Divine Secrets of the Ya-Ya Sisterhood as the eldest Teensy, and Waking Ned.