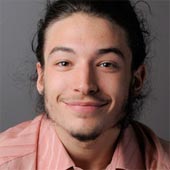 Ezra Miller is an American actor, known for his roles as Vincent "Vinnie" Rizzo, Jr. in City Island (2009), Elliot Hellman in Another Happy Day (2011), and the titular character of We Need to Talk About Kevin (2011). He starred in the 2012 teen drama The Perks of Being a Wallflower, with Logan Lerman and Emma Watson, and has signed on to play the role of Léon Dupuis in Sophie Barthes' adaptation of the Gustave Flaubert novel Madame Bovary.