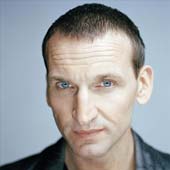 Christopher Eccleston is an English actor, who is known for his extensive television work, most notably portraying the Ninth Doctor in Doctor Who. He has also appeared on stage and in films such as Let Him Have It, Shallow Grave, Jude, Elizabeth, Gone in 60 Seconds, The Others, 28 Days Later, The Seeker, G.I. Joe: The Rise of Cobra, and Thor: The Dark World.