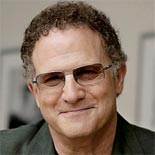 Albert Brooks is an American actor, voice actor, writer, comedian, and director. His voice acting credits include Marlin the clownfish in Finding Nemo, and recurring guest voices for the animated television series The Simpsons, including Russ Cargill in The Simpsons Movie. Additionally, he has written, directed and starred in several comedy films such as Modern Romance (1981), Lost in America (1985) and Defending Your Life (1991) and is the author of the satire 2030: The Real Story of What Happens to America (2011).